John, 15th Earl of Glencairn, died childless in 1796. Finlaystone went to his cousin, Robert, the son of his aunt Margaret and her husband, Nicol Graham of Gartmore.

Robert Graham took the additional name of Cunninghame on his succession, but died soon afterwards in 1797. His son had already been christened with the same middle name.

The next three generations, William, Robert, William, brought up their families at Finlaystone, living there happily with their children until each in turn inherited Gartmore.

William Cunninghame Cunninghame Graham was known in the family as “the swindler” for forging bank notes, apparently at the instigation of his wicked step son. Though not convicted, he sold most of his possessions to repay the bank.

William Bontine Cunninghame Graham (his grandson) was forced by debt to sell Finlaystone in 1863.

Robert Bontine Cunninghame Graham, his flamboyant elder son (later known as ‘Don Roberto’ was eleven when Finlaystone was sold. At eighteen he was sent to Argentina to learn about cattle ranching with the gauchos, and became an outstanding horseman. Having married a Yorkshire actress, he became a left-wing Liberal M.P. for six years. He later took to writing, and numbered Conrad and Shaw among his closest friends. Finlaystone features in several of his published stories.

Douglas’ colonnades and pavilions were replaced – possibly in the late 18th century – with solid extensions in the style of his new house. The addition of the kitchen wing and tower for water storage, was made by Sir David Carrick-Buchanan.

Sir David Carrick-Buchanan became owner of Finlaystone in 1863, after Lord Palmerston had all but bought it for Cohn Campbell, Lord Clyde, the hero of the Indian Mutiny. In 1873 he rented it out to one of his hunting friends, George J. Kidston to whom he sold it in 1897.

Lilian Kidston, one of George’s six daughters (he also had three sons) married Richard Blackiston-Houston, an Irish banker, and was able to buy out her siblings’ shares in the estate, and so keep it together to hand down in the family.

Marion Blackiston-Houston, their daughter was married in 1929 to the soldier Gordon Holmes Alexander MacMillan, who in 1952 was discovered to he the MacMillan of MacMillan and Knap – the Chief of Clans an Mhaoil. Their son George Gordon MacMillan inherited Finlaystone in 1955. His eldest son, Arthur, became Chief Executive of the Clyde Shipping Company in 1995 and now owns the house. 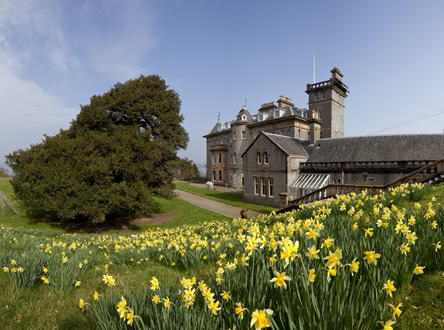